On the south side of Louisville, you will find Iroquois Park, one of the three flagship public parks (along with Cherokee and Shawnee) in Frederick Law Olmstead’s ambitious plan for the city’s parks. The park features a magnificent view of the city, basketball courts, 18-hole golf course, disc golf course, a riding stable, and the 2000 plus seat Iroquois Amphitheatre.

Built in1938 under the auspices of the Works Progress Administration (W.P.A), the largest and most ambitious agency under Franklin Roosevelt’s New Deal, the Amphitheatre is nestled on the lower side of Iroquois Park, along Parkside Drive. The stage faces southwest so that sun sets behind the audience, with a grand pavilion roof shielding the performance from what would be a blinding glare. The design is adept at keeping the seating relatively cool during the summer months.

The calendar of events is populated by civic events such as graduations ceremonies for DeSalles, Fairdale and Iroquois High Schools, and commencements for Louisville Metro Police and Fire Departments. The Americana Community Center holds a World Festival each summer that reflects the way in which the cultural diversification of the south end population has shifted in the last twenty years. Neighborhoods like Beechmont, Kenwood Hill, Auburndale, and Fairdale cherish Iroquois Park and the Amphitheatre, but what is its relationship to the rest of the city? What will draw people from Downtown, and the west and east sides? 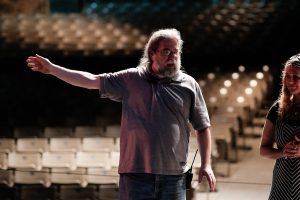 The Amphitheatre is ideal for musical concerts, and that remains the most common form of entertainment booked there. The current General Manager Mike Hallett works with various promoters in the region to book high profile acts like Wilco and Old Crow Medicine Show, and it has become a regular stop for Teddy Abrams and the Louisville Orchestra, who will give a 2nd annual free season preview here on September 9. Hallett feels that each concert draws from different areas: “I know who pulls from the Bardstown Road area,” claims Hallett, “or who has a stronger appeal from west end neighborhoods, but very few acts attract equally from all parts of the city.”

But Iroquois Amphitheatre has set a mission to bring more original productions into the facility. “We want to be a developer of arts programming,” explains Hallett. “We want to afford local companies the opportunity to develop original work.”

Yet, in a busy theatre community in which audience size in some venues is less than 50, how many Louisville groups can manage productions to fit a stage and audience of this scale? Many long-time residents can recall seeing full-scale productions of classic musicals such as Man of La Mancha, Hello Dolly!, and West Side Story staged by Music Theatre Louisville. After long years in residence at Iroquois, they relocated to The Kentucky Center for the Arts in 2009, and three years later ceased production after merging with Stage One Family Theatre.

In 2012 Metro Parks produced Gilbert & Sullivan’s H.M.S. Pinafore, followed a year later by The Pirates of Penzance, both critically lauded productions directed by Gregory Maupin, but the crowds of more than 300, while larger than most any other local company could claim, still left the vast Amphitheatre feeling empty. Around that same time, the stage was made available for use during winter months by formatting it as an interior performance space. With the oversized overhead door down, it was fashioned into space comparable to other venues available to local theatre companies, such as The Mex at Kentucky Center for the Arts, but with all of the technical bells and whistles, the facility offers larger productions. Savage Rose Classical Theatre Company used the wide expanse of the stage to mount an intimate yet still epic Macbeth, and Theatre [502] presented Broadsword and Qualities of Starlight in the space, which is known as Parkside at Iroquois.

Yet it was still a challenge to attract audiences accustomed to finding most theatre downtown or on the near east side of the city. More recently, a new circus theatre troupe, CirqueLouis, has drawn respectable crowds for their expansive narratives incorporating circus performance techniques. The company’s most recent production, East of the Sun, incorporated another local troupe, Squallis Puppeteers, and was produced in conjunction with Iroquois Amphitheatre. 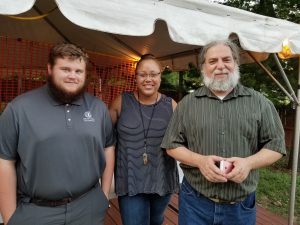 Hallett wants to seem more local companies see Iroquois as an opportunity to create original programming that takes full advantage of the resources he has available. “We are able to deliver the quality that we do because of our staff, which is high caliber from top to bottom.”

“I don’t believe people in other parts of the city are aware of the millions of dollars that have been pumped into the south side,” continues Hallett. “There are good restaurants just down the street, so downtown isn’t the only place to find dinner and a show.”

So Hallett and his staff are involved in a continual effort to return Iroquois Amphitheatre to its past glory. The facility has been physically renovated – clean and compatible with a range of entertainment, but the important work now is the restoration of its full potential as the Louisville landmark its history demands.