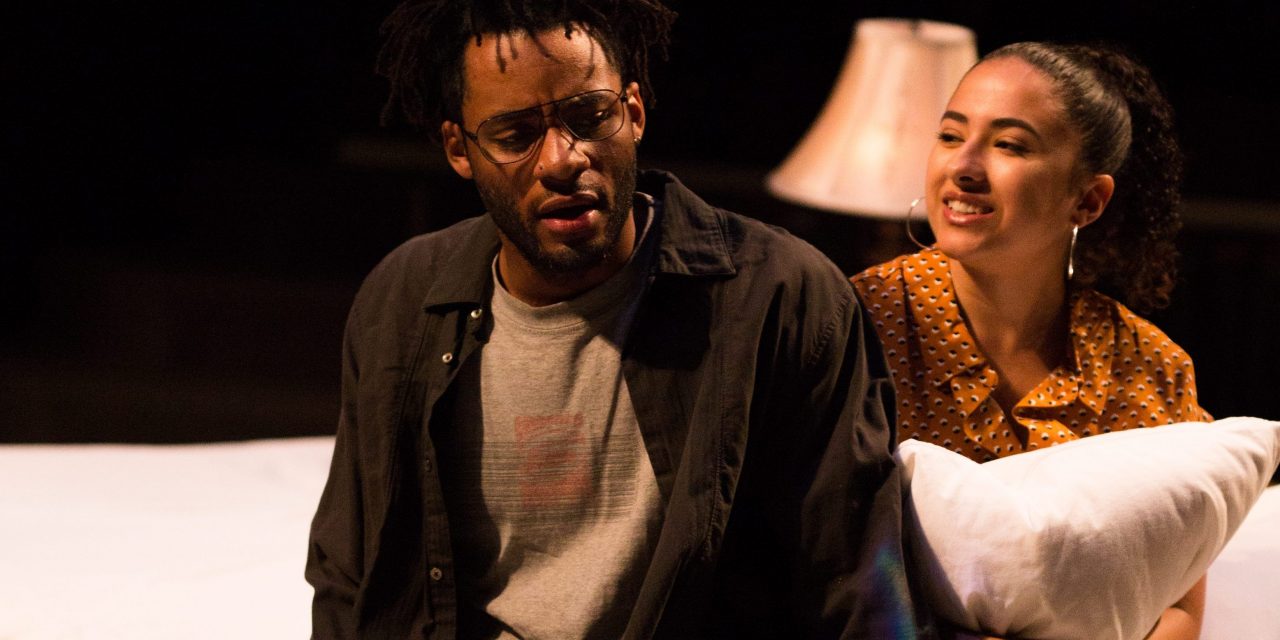 Speculation and introspection are at play in eight new short plays written by young writers in this year’s iteration of Actors Theatre’s New Voices Playwrights Festival.

Most of the stories are about coming of age, not surprising given the tender years of the authors, and we expect writers to draw from first-hand experience, particularly at the beginning of their career. Although most of the scripts are crafted from imagination, when they are grounded in naturalism it is easy to assume the pain exposed comes from real life, but difficult to know for certain how autobiographical these stories might be.

Luna, by Maddie Gaughan (Youth Performing Arts High School), opened the program by building a nice foundation for the world of the teenager. The story about a girl named Mia (Amber Avant) on the hunt for her bicycle after her father (Jonathan Moises Olivares) sells it at a yard sale is exactly the kind of story we would expect from a writer at this age, but there is also a hint of the fascination with The Other, alternative relationships that define us at a crucial time, and perhaps for the rest of our lives. It was a fine balance between the competing strains of fantasy and reality that played throughout the evening. Directed by Rachel Bishoff.

Under the banner of imagination we find The Wilting, by Gabe Cora (Floyd Central High School), which uses whimsy to wring surface laughs from an amusing futuristic scenario that ends on much darker, apocalyptic notes, and Man of Dance by Corbin Gravil (Kentucky School for the Blind), with a simple comic take on loneliness answered by otherworldly spirits. Both feature vivid language and an absurdist edge. The Wilting was directed by Emma Leff, and Abigail Miskowiec directed Man of Dance.

Assumption High School student Sophie Ice’s The Circle of Leaf is a sweet-natured exercise in anthropomorphism, charting the twilight in the lives of two leaves anxiously awaiting the inevitable but only because they dread being separated. Josh Fulton as Chestnut and Emma Maltby as Maple find the charm and the dignity within the slight but winning concept. Directed by Emily Moler.

Alter egos are given good use in two of the plays. Purple, by Katelyn Spencer (Washington County High School), follows the silent interplay between two painfully shy adults at a bus stop, (Reagan Stovenour & Russell Sperberg) the anxious build up to find the courage to speak expressed through their individual Consciences (Kevin O’Connell & Laura Lee Cundiff). Although we assume that level of awkwardness with teenagers, the writing and playing remind us that the difficulty in connecting with another human can be a life-long challenge, or don’t we always feel like an insecure teenager at various times throughout our adulthood? Directed by Rebecca Redman.

Claire Binford’s, What’s More Important? (Male High School) realizes a different voice in our head, the incessant disciplinarian driving Obsessive Compulsive Disorder. Ashley N. Hildreth cuts a fine figure of exasperation as the student caught in the throes of the disorder, and Avery Deutsch’s perfect level of panicked annoyance is nicely leavened by charm and the curious costuming that includes a green plaid skirt, knee-high socks, and a memorable orange beret. I am not sure of the meaning of the outfit, but it seems just right. Directed by Sharifa Elkady.

Sickcom, by Sara Sandfort (Male High School), felt less successful in realizing its ambitions, but it also features a neat narrative twist that all but prevents a full discussion here. It begins as a riff on the contrived, overemphatic style of storytelling characteristic of too many situation comedies, with each groaner of a joke propped up by an absurd “canned” laugh track combined with a telling commentary of the embrace of outrageousness for its own sake when a roommate brings home a dead body on a whim. The story shifts gears, and if it feels too much a gimmick with insufficient purpose, it also feels like the play that could most benefit from being expanded beyond the approximately10-minute run time. Sandfort is dipping her hand in very deep and dark psychological currents here, and she could benefit from a little more time to develop her concept onstage. Directed by Rebecca Redman.

Ariana Tulay’s Misaligned Skies (Moore Traditional High School) was an especially sensitive exploration of a challenging daughter-father relationship. As the Daughter, Angelica Santiago responds with natural, unforced work that was a high point of her year at ATL, and Rasell Holt brought so much texture and nuance to the Father, playing a character more than twice his age with no need for artifice. He shows the age and self-awareness of a man who has struggled for years with mental illness and must now leave his home purely through the good observational work of an actor. Directed by Janelle Renee Dunn.

Ultimately, the New Voices Festival is both an introduction for these young playwrights, but also a valedictory for the members of the Professional Training Company (PTC), who are at the end of their one season of service for Actors Theatre of Louisville. Not many writers of any age are given the opportunity for their work to be produced at a professional level, and there are a range and diversity in the PTC that allows their fertile imaginations to go down almost any avenue.