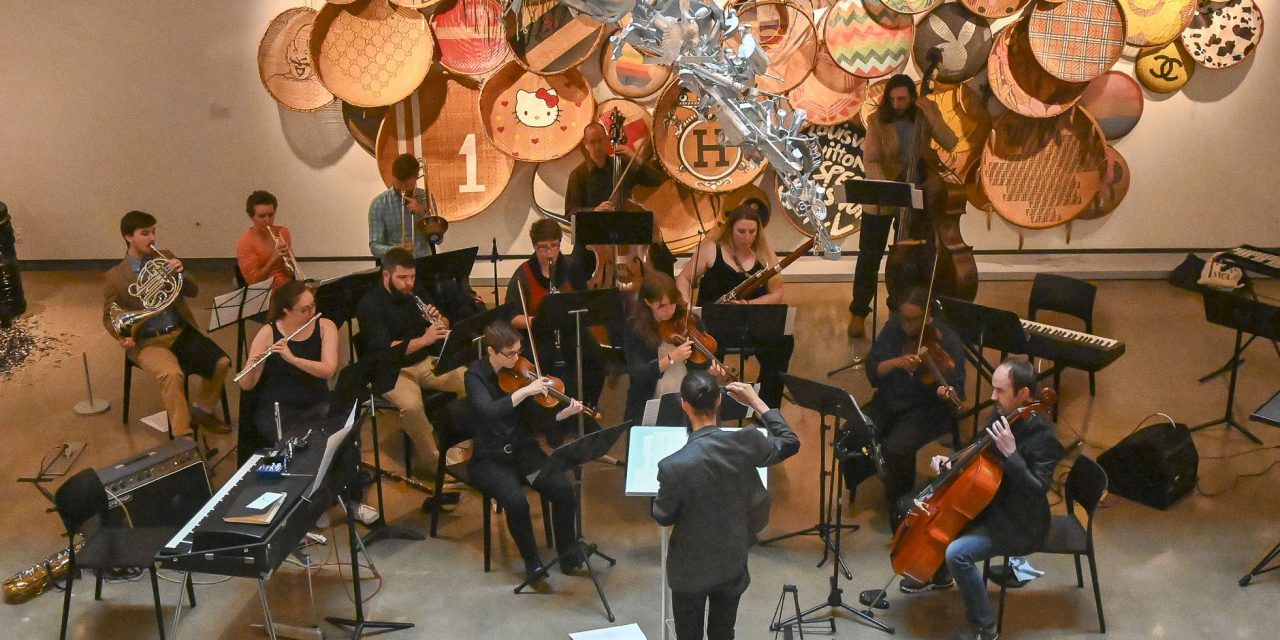 As the crowd at 21C began to settle into their seats with drinks in hand, Orchestra Enigmatic president Maria George shared her excitement for the presentation and for the audience who had gathered. She then went on to invite everyone to feel free in moving about during the concert and enjoy the wonderful artwork that surrounded us. Well, that is certainly something that one does not hear every day when attending a concert.

Such is an example of the differences that can be found within Orchestra Enigmatic. Another difference would be in the kind of music that is performed. I dare say that I would be surprised to hear a classic like Strauss’ “Also Spach Zarathustra” or a Beethoven classic. Instead, I think it safe to say that their musical leanings lean toward the more Avant Garde, say…Phillip Glass or John Gage.

Friday evening’s performance certainly lived up to the Enigmatic nomenclature. We begin with Charles Rivera’s “Camping”. Mr. Rivera has performed throughout the area, most recently at Bernheim Forest, and collaborated with the Louisville Orchestra. I was a little taken aback by the composer’s conducting style in which he would occasionally lift his right arm and point to the orchestra and also raise an index card that I would presume has a note on it with directions just for the musicians’ eyes. The piece is filled with stilted breaths and lines that are all pointed and disjointed at the same time. I know that seems a bit odd, but believe me, that is how the sound comes across. Melodies and harmonies stretch from the odd to the sublime in tonality and cleverness. The woods and winds have a majority of the work within the piece in that their notation more closely resembles what I would imagine what Mr. Rivera is trying to imitate, camping. Therefore those instruments express the sound of nature in somewhat peaceful and, in the case of the saxophone solo, very harsh tones. But, through the course of the new-to-me composition, there was a hint of familiarity, whether it was by accident or not, I know that I heard an acquainted melody: Aaron Copeland’s “Appalachian Spring”. Overall, this selection, while a bit long as it took a while to settle, was emblematic of what Orchestra Enigmatic tries to achieve.

The second selection of the evening was every bit as entertaining as its title: “The Vampire Slept Between the Stacks in his Orchard’s Library; He Dreamt of All of the Horrible and Terrible Secrets that Smelled of Cheap Champagne, Dying Oranges and Gasoline”. Written by Orchestra Enigmatic’s Composer in Residence P. Kellach Waddle, “Vampire Slept…” does a lot with a handful of instruments. In describing the piece, bassoonist Jackie Royce commented that the composer states that there are dissonant chords, back and forth motifs, and other goings-on. Can’t say that we weren’t warned. Yes, there were certainly small hints of such trickery, but when you listened above those musical embellishments there was actually some subtle, yet effective melodic movement. Given the Romanian feel of the piece that lends itself to thoughts of Dracula, I believe that Mr. Waddle delivered a rather romantic composition.

Rounding out the evening, composer Johannes Visser took the podium and shared with the audience his take on what the sounds of Cape Town, South Africa would sound like with his “Bo-Kaap”. From the first striking entrance, one gets a sense that this piece could be drawing on a multitude of influences, just not the ones that I was expecting. When learning of the influence of South Africa I was thinking of more African inflections, yet I detected but a smattering. While there was a percussive element within, it was more modern than the use of a traditional instrument like a djembe. I’d like to think that choice was on purpose as the composer is looking at Cape Town’s present and future. So, what influence did I hear? Would you believe Westerns? Like, Spaghetti Westerns. Genteel melodies were woven in and around and through the whole of the piece. And like the first piece, there was a familiar influential melody: George Gershwin’s “An American in Paris”, without the beeping horns, but submitted with some dramatic effect. Overall, it was a lovely ending to the evening.

I am enamored of Orchestra Enigmatic’s musical prowess. The pieces that I have been lucky enough to listen to and enjoy the past few concerts that I’ve attended have been, in a word, challenging. As an audience member with a sense of musical theory and composition I catch myself placing the musical notations in my head and thinking, wow, that takes a lot of skill and trusting that your fellow instrumentalists know what they are doing.

I am here to tell you that they do and they will challenge your perception of music, but in a very good way. 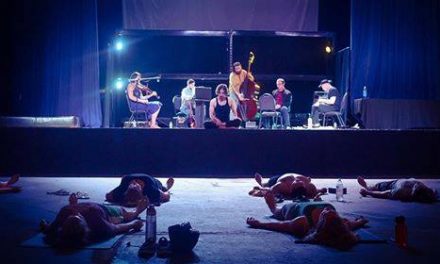