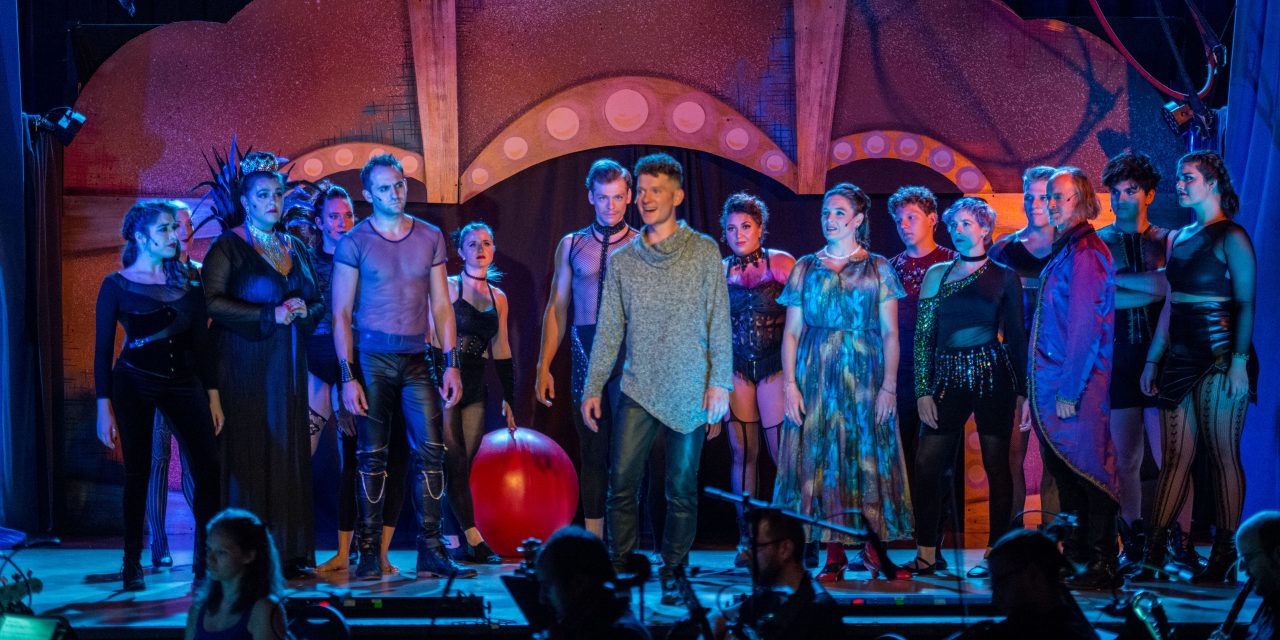 Intrigue, plots to bring disaster. Humor, handled by a master. Romance, sex presented pastorally. Acting Against Cancer in collaboration with CirqueLouis certainly has magic to do as it opens another season with Pippin. This outright delight of a show hits the mark with tricks, tumbles, and flights of fancy as a young prince finds his way in the world.

The spectacle is exposed the minute you walk into the Art Sanctuary and continues to build with tremendous magnitude. An orchestra loudly tunes their instruments; performers remain just out of sight as the lights dim to cue the start of the show. Where does fantasy begin and reality end? With tremendous pizzazz, Myranda Thomas is a keen Leading Player. Fully equipped with vocals that crescendo with gusto, she makes “Glory,” “Magic to Do” and “On the Right Track” looks easy and effortless. Thomas is sure to unite the other players in her ensemble. An eclectic crew in black tights and leather, these players are mysterious yet engaging as they present a medieval legend in the modern-day context. Each shoulder shrug, flick of the wrist, and other signature Fosse moves performed by the ensemble adds a refreshing hipness to this arguably dated piece of musical theater.

At the heart of the production, is Michael Detmer as Pippin. Detmer is curious and adventurous as he seeks to “live a life that is extraordinary.” This character is looking for something that is like no other, but what is that exactly? Detmer brings relatable insecurities, tenderness, and frustration to each possibility he explores. His rendition of “Corner of the Sky” is filled with sweet pomp and circumstance while reprisals of the famous ballad turn bittersweet as Detmer’s prince gains life experience. Perhaps his most profound experience falls at the feet of Catherine, played by Olivia Duff. Duff’s young widow is introduced with whimsy in “Kind of Woman” which slowly crumbles in heartbreak as Pippin’s search for fulfillment continues. Duff and Detmer prove their chemistry in a sweet and intimate rendition of “Love Song” which carries through until the play’s final moments.

Other key players defer to and direct Pippin’s journey. Mike R. Price elicits laughs as Pippin’s father, Charlemagne. Equally impressive is his ability to speed through “War is a Science” without breaking a sweat. Hannah Jones Thomas brings youthful quirkiness to Pippin’s grandmother, Berthe. Thomas delivered wisecracks and graceful aerials during “No Time at All.” Julie Riehm McGuffey’s cheekiness as Fastrada is a real highlight of the show, especially during “Spread a Little Sunshine.” Together with Remy Sisk’s bloodthirsty brute, Louis, this mother and son duo shimmy and shake with great magnitude.

Pippin’s theatrics are emboldened by a live 12-piece orchestra led by John Austin Clark. Lively and rich in sound, the full orchestra enriches the energetic bops and toe-tapping melodies. Encompassing a range of genres, the musicians provide strong unwavering performances as a whole. 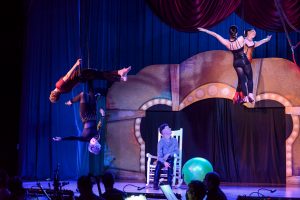 I cannot say enough positive things about this production. The poppy score by Stephen Schwartz (of Wicked fame) paired nicely with the circus concept of the Broadway revival in 2013 and again with this production as well. With each silk climbed, balancing act, and physical contortion, CirqueLouis expert performers impressed with their physicality and skill. The circus concept is a brilliant metaphor for finding oneself in a world of natural chaos, an historical world captured through anecdote and show business. To say Acting Against Cancer’s Pippin is an “anecdotal review” packed with extravagant illusions and spectacle would be an understatement, to say the least.