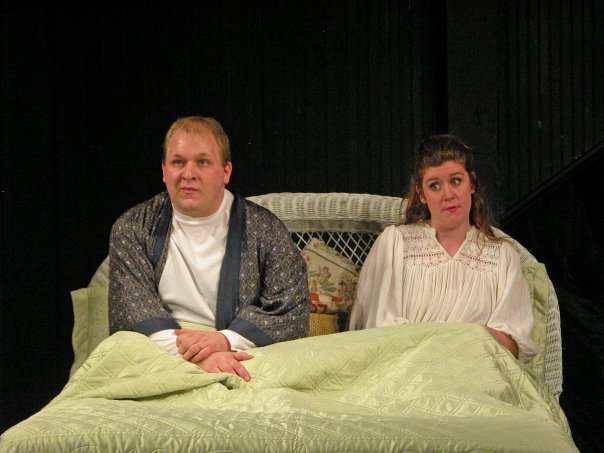 Bryce Blair & Carrie Cook Ketterman in I Do!, I Do! at Little Colonel Playhouse (2009)

An underlying theme in my project of discovering cast recordings has been an exploration of the movie-to-stage phenomena that has dominated Broadway since 1990. In this seventh round, I spent time with Pretty Woman, Tootsie, and Rocky. While listening to Pretty Woman, I expected music by Roy Orbison or Prince to appear as they were pivotal to the film’s success. Instead, I received soft rock right out of the late 80s within this fairytale about Hollywood dreams. Rocky boasts theatricals of training and the showmanship of athletics with “Gonna Fly Now” and “Eye of the Tiger.” As for Tootsie, which is slated to make its way to Louisville in the upcoming Broadway series? I heard a myth that Stephen Sondheim said he turned down an offer to turn the classic Dustin Hoffman comedy into a musical because it was perfect as is. I agree. Nonetheless, I look forward to seeing the staging of the beloved comedy masterpiece that features songs like “I Like What She’s Doing” and “This Thing.”

Caroline or Change: This southern gothic Blues opera is about a maid in the 1960s and the little boy who adores her. Set within the civil rights era, the relationship between Caroline, the family she works for, and the family she keeps is challenged as ideas and beliefs are tested. What’s key in this work is the little boy Caroline cares for; as his perception of the world changes so does his love for her.

110 in the Shade: This show is just as thick and raw as the humidity within the small town in which it is set. Following the story of a con artist who claims to create rain and Lizzie, the woman who sees through his deception, the show is a curious tale about what makes a dream and how to bring about change in your life. In the 2007 Broadway revival recording I listened to, Audra McDonald brings convictions and stubbornness to Lizzie within songs such as “Raunchy,” “Old Maid” and “Simple Little Things.”

Ain’t Misbehavin: This is a rousing and wonderful review of songs by the legendary Fats Waller. Featuring “Spreadin’ Rhythm Around” and “Your Feets Too Big,” the original cast recording is full of spirit and tenacity. Combining elements of jazz clubs in the Harlem Renaissance, the songs walk the line between show tune and a bygone era to produce a swinging good time.

I Do!, I Do!: This is just a sweet little show about marriage. From wedding day through child baring to the golden years, the score manages to be sincere without coming across as too maudlin. With a two-person cast, this show would be ideal for local companies on small stages and yet only one production from years ago comes to mind. And after all, the sentiment, “The best day of all Is the day that is on its way” is one we could all use right now.

John and Jen: Another simple and sweet show, this one follows a couple of siblings growing up in times of change. This two-hander would be another perfect production for smaller local companies trying to make the best of smaller venues. Following a sister and brother in the turbulent Vietnam era, their views on the world alter and sway from Baseball games and crushes in “Dear God” to bigger political themes in “Timeline” that nearly divides them as a family. And yet their relationship proves blood runs deep as proven in “Every Goodbye is Hello.”

Nice Work if You Can Get It: This feel-good jazzy show about debauchery features the greats of George Gershwin.

Tarzan: With Phil Collins music, crucial Disney family themes, the real fun comes with imagining how actors swing from vine to vine in this musical.

Beetlejuice: Although the show is funny and songs like “Whole Being Dead Thing” and “Ready Set Not Yet” fit right into Tim Burton’s quirky and kooky world, you just can not beat the original movie.

13: Simply put, if Spring Awakening wasn’t a tragedy and set in a modern era, it would be this show.