Julie Leidner is a Louisville native who has exhibited locally as well as in New York, Massachusetts, and Pennsylvania. She has taught for Louisville Visual Art, The Speed Museum, Kentucky College of Art + Design, and currently works as a Museum Educator at The Carnegie Center for Art & History in New Albany, IN. She was the recipient of the 2015 Mary Alice Hadley Prize for Visual Art and a 2018 Great Meadows Foundation Residency Grant. In 2018 Leidner founded Sheherazade, a project space in Old Louisville.

1. You manage Sheherazade, arguably the most unique art space in Louisville. Have you had to cancel or postpone any exhibits?

No, I haven’t had to change anything. As a 24/7 window gallery, our lights are always on, and the shows are always meant to be seen from the outside. We may be the only art space in the city that has operated normally throughout this pandemic and I must say that is a sad distinction that I never wanted to have.

Our last opening reception for Kim Charles Kay’s show got in right under the wire. It took place on March 7th—the same night as the Speed Ball. “Social distancing” wasn’t really a thing yet at the time, but there was a fresh kind of wariness in the air. We encouraged elbow bumps and had tons of hand sanitizer at the opening. I’m glad we all got to have that togetherness. Obviously after that evening, shit started to hit the fan in Louisville.

Our next show will be unveiled on June 5th, 2020. It will be a solo show by local artist Aaron Rosenblum. No in-person receptions for this show are scheduled so far, but that could change as the times do.

2. You recently collaborated on an installation in NYC. How did that come about?

You know Keith, sometimes I wonder that myself. It wasn’t something I applied for—it happened by chance. Here’s the story: I was living alone in Brooklyn in the summer of 2018 on an artist residency that I was funded by the Great Meadows Foundation. I went to a ton of small art galleries by myself. If the person working there was friendly, I would say hi and introduce myself.

At one gallery in Bushwick called Tiger Strikes Asteroid, the woman working there, Yael Eban, actually remembered me and contacted me many months later. Tiger Strikes Asteroid and their sister gallery, Trestle, were planning a series of shows for 2020 called Artist-Run, curated by artist-run spaces from outside of New York. They asked if Sheherazade would be one of 11 artist-run spaces to curate a show in their spaces.

In looking at a map of all the artist-run spaces that they asked to do this, we were the only ones representing the southeast region of the country. So I hauled a huge Joel McDonald sculpture up to New York in the back of a rental car right before New Year’s Eve. Our show, The View From the Gorge, was the first of the series and opened in January 2020—again getting in right under the wire before the coronavirus appeared on the scene in New York. It was amazing and the whole thing feels kind of like a dream.

3. Tell us about the on-line art lessons you’ve been doing for The Carnegie Center?

When the pandemic canceled all of our programs at the Carnegie Center, along with all of our school field trips to the museum, and all of my visits to schools as a museum educator, all those people didn’t stop needing or wanting free art education.

But we are a tiny staff of six people, so we kicked into a triage system. We started by offering virtual activities for families with tiny kids. That’s because we knew that parents would be home needing activities for kids who aren’t on auto-pilot yet. So I put on my Mr. Rogers sweater and filmed a “Miss Juju Draws The Alphabet” series for kindergartners in my living room, and my boss Eileen was—and still is—doing multiple live Zoom art classes for pre-K every week. Then slowly we started adding in things like live video drawing classes for older kids, and programs for adults.

Just like everyone else, we are wondering how long this virtual programming is going to last. We still want people to come back into our museum and see art in person, but already some of our major long term education projects have been transitioned to the digital world.

For example, when in-person school was canceled in March, I was in the middle of a year-long collaboration with a group of 3rd graders in New Albany. I had visited their school every week since August 2019 and we were writing and illustrating a book together. But instead of printing the book and having a big party with them to celebrate as planned, we made the book digital and just emailed it out to their families this month. It’s pretty darn cute if you want to check it out here.

4. When did you know you were an artist?

When I was in 2nd grade and I won a chalk drawing contest at the Bashford Manor Mall parking lot. Every kid got a parking space to draw in, and I drew some asinine scene of a girl hanging upside down on a tree branch. My drawing won first place. I won a trip for my whole family to Holiday World and a giant roll of bubble gum that was meant to hang around my neck like a pendant. I was interviewed on the local news, and when the reporter asked me if I thought I was going to win, I said yes. I cringe thinking about it. But I think that was the moment I realized that art could be personally rewarding—even if in that case, the reward was superficial. As an adult who grapples with self-doubt as an artist all the time, I’m still trying to unpack that.

I got a BFA in Painting at the University of Louisville and worked under Gabrielle Mayer and Mark Priest. I took as many art history classes with Jay Kloner as I possibly could. I had some of the best teachers of my life at U of L. A few years later I went to the Rhode Island School of Design for my MFA, also in painting. Some great professors I had there were Chris Ho, Andrew Raftery, and Carrie Moyer (who mentored me as I taught my first class at RISD).

As a curator, my only training is a lifetime of being intensely interested in what other artists are doing. That means seeking out art in places high and low, finding the most curious people, going to art shows in the fancy museums and the dingy basements, and everything in between. Introducing myself to artists that I don’t know, making mental connections, feeling inspired, asking to learn more, learning to listen better.

6. Has self-isolation motivated you to be more productive?

Being in quarantine hasn’t changed the fact that I (am lucky to) still have a full-time job. I spend a lot of my day working virtually on the education programs that I explained earlier. I have also spent quite a few hours working as a member of the steering committee for A.R.T. — The Artist Relief Trust, a program giving grants to artists who are struggling to pay bills during the pandemic.

I had big plans to make a lot of art during the quarantine but I’ve been too nerved up. Much of my mental and emotional energy has been devoted to manically planting, preserving, and freezing food, and checking in with people incessantly on apps like Marco Polo.

One thing I am working on is a litho for Calliope Arts’s new series of commissioned prints from 19 artists, The COVID-19 Project. I had to choose a printmaking method, and I chose to make a lithograph. It will be my first ever litho. I chose that medium because it’s so close to drawing, and drawing is my first and forever love. Sales from these prints will support the Artist Relief Trust. People should be hearing more about this project soon from Calliope!

7. Besides Louisville, what other places have you lived and worked?

I lived in Providence, Rhode Island during grad school and in Pittsburgh, Pennsylvania after that, where I worked odd jobs and hung out with the Carnegie Mellon MFA crowd.

8. How is working in Louisville different?

Providence was a college town, with a young population that swiftly cycled through it. Even my professors didn’t stay in Providence—they lived in NYC and commuted to and from RISD. Louisville is the opposite of that. People settle in here. Relationships, both personal and professional, have a chance to get long and drawn out and ripen like a fine cheese.

Pittsburgh was industrial and colorless compared to Louisville. But the art scene there was scrappy and inventive. I lived in a converted factory with a bunch of other artists, and I worked at a restaurant called The Conflict Kitchen that was run entirely by artists and only served food that the United States was in military conflict with. It seemed like every weekend there was a new warehouse that was being used for a one-night art show or a weird group performance on the river. Abandoned houses would be turned into art installations. I left because I couldn’t find a real job but I sometimes miss the no-excuses, almost lawless kind of energy that the art scene had in Pittsburgh. I feel like I still have a little piece of that with me.

9. If you hadn’t become an artist, what would you be doing?

Probably something to do with history and researching old things. I do that a little already at the Carnegie Center, since we are an art and history museum. But if art weren’t in the mix, I would still be very happy surrounded by dusty books and microfilm.

10. What music have you been listening to?

I have favorites and stubbornly stick to them, like Patti Smith or Odetta. Otherwise, whatever my husband Chris puts on. He’s the musician in the family.

I just finished reading the complete short stories of Flannery O’Conner—her language will transport you right out of your room. Now I’m reading an early, funny Margaret Atwood novel called Lady Oracle. I bought it on an impulse thinking it would be about actual oracles, of the Greek soothsaying variety. There are no oracles so far. 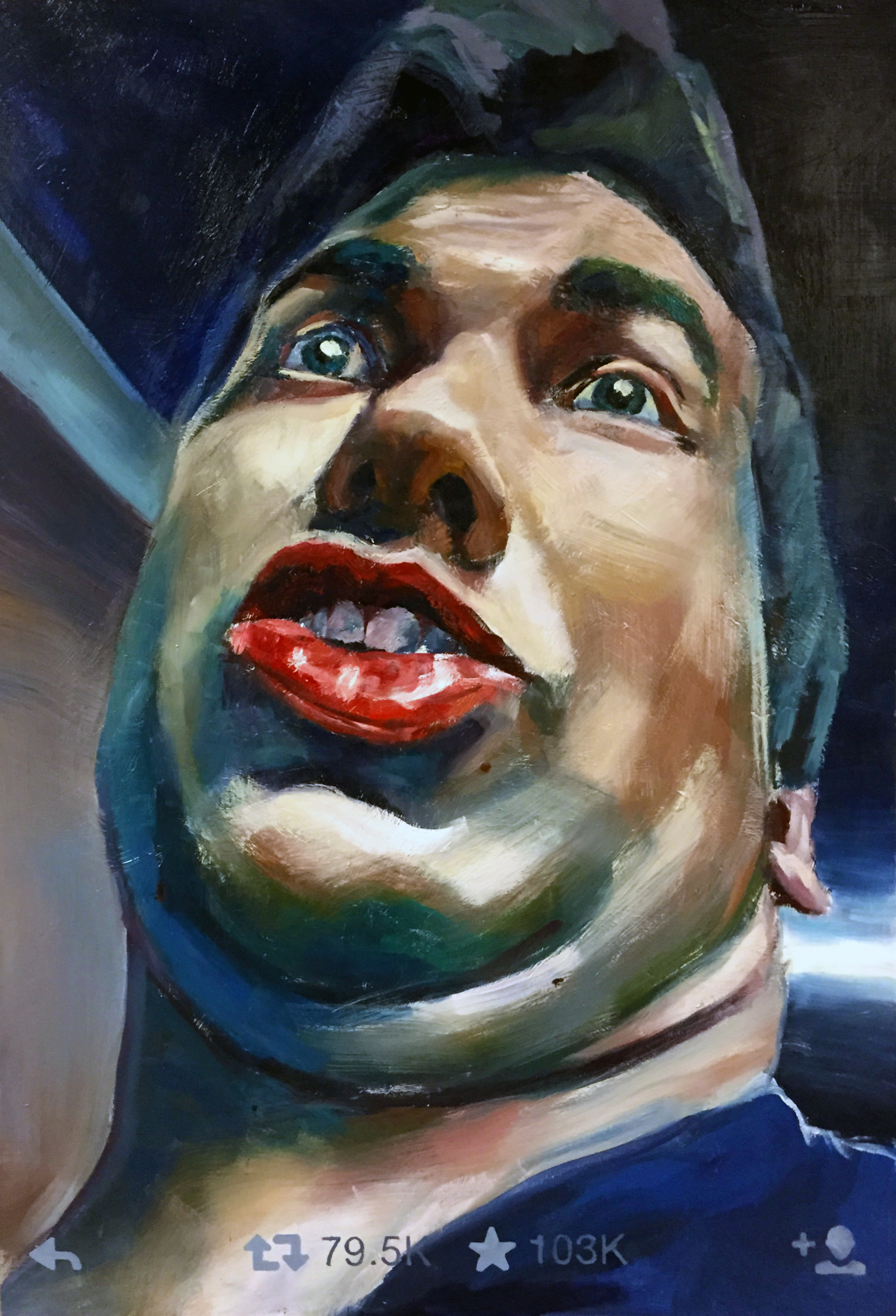