My mind went to all kinds of different scenarios as to what kind of music could be called upon to represent the Sacred and the Profane. Would it be a mix of hymns and spirituals pitted against more hedonistic pieces reminiscent of jazz and heavy metal rock? Turns out, I wasn’t too far off of the mark.

Over the past couple of years I have been intrigued as to where Maestro Abrams’ musical genius would lead us to and this evening’s offerings were varied, educational and uplifting.

The evening began with Darius Milhaud’s The Creation of the World, Op. 81A. As I am not familiar with this piece or its composer, I listened rather intently to music that conjured images of the dawning of time or the Big Bang, if you’d like. Soon visions of bucolic landscapes and animals frolicking about came from within a quiet movement, but just as you are enjoying the calm, loud crashes resonated throughout the orchestra and all I could think was: the coming of man. Due to some jazz influences scattered about, parts of the piece are reminiscent of American composers Leonard Bernstein and George Gershwin. As Maestro Abrams shared in his introduction, Milhaud was indeed influenced by American music and absorbed it when he arrived here in the early 20th century. The composition was certainly a nod to the development of humans and their relationship to the universe. One of the beauties of this piece was that it was meant for soloists, so it is performed with 18 solo instruments, making it feel more intimate and personal.

Heinrich Biber’s Rosary Sonata No. 9 was played with great passion and verve by violin soloist Gabriel Lefkowitz, and accompanied by Teddy Abrams on the not-often-played harpsichord. It was a serene and beautiful nod to the sacred side of the evening.

I was pleased to learn that just down I-64 at the University of Kentucky they are involved in teaching and performing Eastern music, such as Indonesian Gamelan. If you are not familiar, Gamelan is mostly percussive music that is indigenous to the Indonesian region. The stage was filled with the traditional metallophones and kendhang, which are used to keep the beat. Other instrument used were gongs, bamboo flutes, and what I thought to be a rebab, a stringed instrument, but was perhaps the morinhuur. Maestro Abrams introduced this talented group by touting the trance like way that one can lose themselves in the sounds of the Gamelan music. The music is rather repetitive, with very little chordal change, but he is correct in that it certainly can promote one to relax and meditate. I applaud this group for coming up to Louisville and demonstrating a cultural music that many have never been introduced to. As I was listening to Sekar Uled and Tabuh Empat, I could imagine our own Louisville Leopard Percussionists getting into this music. 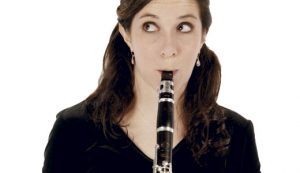 Within the Jewish faith it is known that Isaac the Blind is considered one of the greatest prophets of the Kabbalah and a great mystic with the ability to see the future, despite being blind. Osvaldo Golijov’s The Dreams and Prayers of Isaac The Blind is, in my opinion, a glimpse into the history and future of the Jewish faith. The sections of the piece played for us this evening, the Prelude and Agitato, are steeped in the klezmer style and feature not one, not two, but three clarinet solos, all played by the multi-talented Andrea Levine. Using these three clarinet sounds only enhanced the life and strife of the Jewish people, especially when paired with the orchestra who, at times, would play in a heartbeat pattern. Believe it or not, with the three clarinets, it was the bass clarinet that gave us the highest note of the piece. Let’s hear it for modern technology and talent. Dreams and Prayers is certainly music that sticks with you for a little while and the Orchestra and Ms. Levine definitely delivered.

The first act ends with Bach’s always fun and engaging Sinfonia from Cantata No. 174, also known as the Brandenburg Sinfonia. In a rare occurrence, instrumentalists with handheld instruments stood while performing the piece, which I kind of liked as it accentuated the Sinfonia a bit more.

As spring is just around the corner and tied in so well with the theme of the evening, we were graced with a four hand piano version of the Sacrificial Dance from Stravinsky’s The Rite of Spring. With Sebastian Chang providing the second pair of hands for the piano and choreography from a lovely trio from the River City Ballet, Inc. (Grace Daugherty, Rebekah Degnan and Brooke Jarm), it was a beautiful beginning to the second half of the evening.

One would be hard pressed to find a vocalist that has as rich a tone as Baritone Jubilant Sykes. Louisville audiences were gifted with his talent in 2015 when he sang the role of the Celebrant in the Louisville Orchestra’s collaborative presentation of Leonard Bernstein’s Mass. Mr. Sykes came back to our fair city to share some traditional hymns as part of the Sacred offerings of the evening. It is clear and deliberate in his delivery where his influences lie: Gospel and Jazz, as he is want to improvise and “change things up” at a moment’s notice as he sings. He adds his special touch to “City Called Heaven”, “Ride on King Jesus”, and “Were You There?” For my money though, when he sings “Sometimes I Feel Like a Motherless Child” I experience what is commonly referred to as “the feels”. Tonight was no exception. Lucky for us he gave just a little bit more with an a capella song called “Witness”. Remember when I mentioned he likes to improvise? – it works most of the time. Unfortunately, within the last chords Mr. Sykes seemed to have a little trouble finding a tonal center. Nonetheless, he still sang radiantly.

To end the evening, the good Maestro and 14 of his instrumentalists donned capes – just because Teddy felt that it would be cool – and soloist Scott Moore walked out with his rock violin. Yes! Plug that bad boy in. With a piece called “Achilles Last Stand”, co-written by Jimmy Page and Robert Plant and arranged by Maestro Abrams, I was ready to rock out the evening with what I would call Led Zeppelin “lite”. The rhythmic drums and electric bass were there as familiar Page chords were strewn throughout the piece and the Orchestra soloists kept with the pace and rhythm. What I didn’t hear was the rock violin. Even after Mr. Moore was able to find a moment within the piece that he could get to the speaker and check on the sound, it still didn’t come through. When I could hear a faint sound, it was good; I just would like to have heard it more clearly. Despite the volume issue, I feel that the piece was a great way to end the evening – on the Profane. 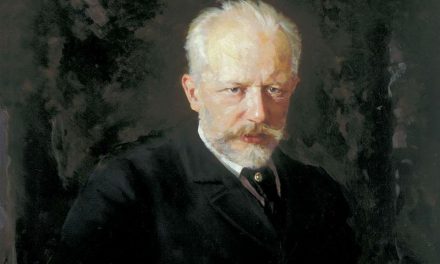 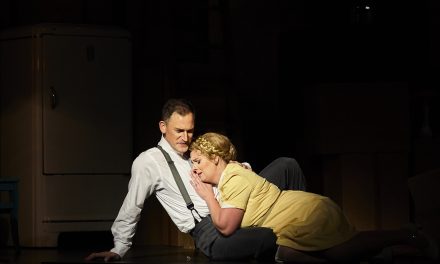 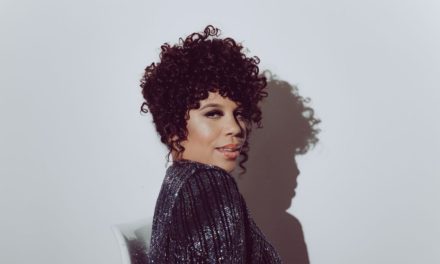