Eddy Janeth’s Iceberg was the winner of the 2015 Theatrical Creation Grant, presented by the Ministry of Culture and Tourism of Cali and has the support of the Mixed Fund for the Promotion of Culture and the Arts of Valle del Cauca. So it is natural that El Delirio Producciones’ Artistic Director Angie Williams-Overstreet and director Manuel Francisco Viveros, both Columbian-born, would choose this material for their latest production.

Having reviewed several Spanish language plays that included English supertitles, there is always some measure of distance imposed by the language barrier. It requires a small leap of faith to connect to the performance and injects the question of translation into any appraisal of the text. The subtleties of tone and texture can be easily lost in the shifting and subjective interpretation.

So bear that in mind when I observe that Eddy Janeth’s Iceberg proved for me a difficult play, a comedy that uneasily deals with themes of identity and violence against women.

The play opens with Gabriella (Angie Williams-Overstreet) furiously working out and watching a televised report on a health disorder, “Fatorexia”, placing us firmly in the realm of satire, as Janeth comments of an unhealthy fixation on an artificial body type based on cultural demands. Her sister Silvana (Clarena Wright) makes fun of her obsessive behavior, but she has her own, arguably more deeply set problems with self-respect in her relationship with a Boyfriend (Omar Avila) who is physically abusive. Their mother had recently passed away, but their Father (Julio Samayoa) is patient and caring enough, although he also seems lackadaisical in his reactions to their problems.

Running in three, brief acts clocking in at less than 2 hours with a 15-minute intermission, perhaps the writing is almost too economical, missing opportunities to provide room for emotions to develop and resonate. I felt the play didn’t always make sense of the changes in character’s attitudes between scenes, and although Janeth’s point-of-view on the issues at hand are laudable, it does not say much that is new about them, and the ending feels somewhat unresolved.

The actors do reasonably good work, although there were one non-sensical moment of strong emotion in act two that didn’t quite work for me. Ms. Williams-Overstreet and Ms. Wright are a nice contrast while still credible as sisters, and Mr. Samayoa is nicely understated as the Father. Omar Avila gives a sneaky performance that effectively renders the obsequious charm hiding the easy rage and violence of a predator.

Instead of the English supertitles, a pre-recorded translation was provided through a UHF receiver. It did a much better job of synchronizing to the pace of the dialogue, but it necessarily obscured to some degree the actor’s voices, which, questions of language comprehension aside, provide a sense of the emotional development os a scene. The recording captured pages turning and the reading was by young people instead of experienced actors, so that it did little to emulate the emotional intention of the play, but I applaud the effort to facilitate the attendance of non-Spanish speaking theatregoers.

El Delirio usually does a pretty good job, so it was disappointing, but I cannot be certain where the problem was rooted for me. It is possible that the Spanish text works better for Spanish speakers, but compared to my other experiences with this company – last year’s La Fuga was terrific, the writing in Iceberg just seemed to be lacking.

Tickets for only $20 regular price and $15 per students with valid ID. For reservations call or txt (502) 851-0889 or email eldelirioproducciones@gmail.com English subtitles would be provided. 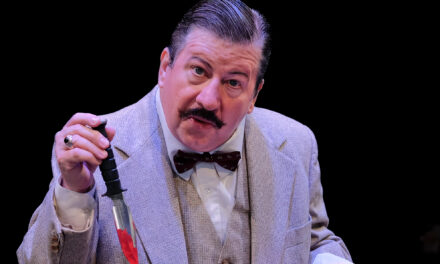