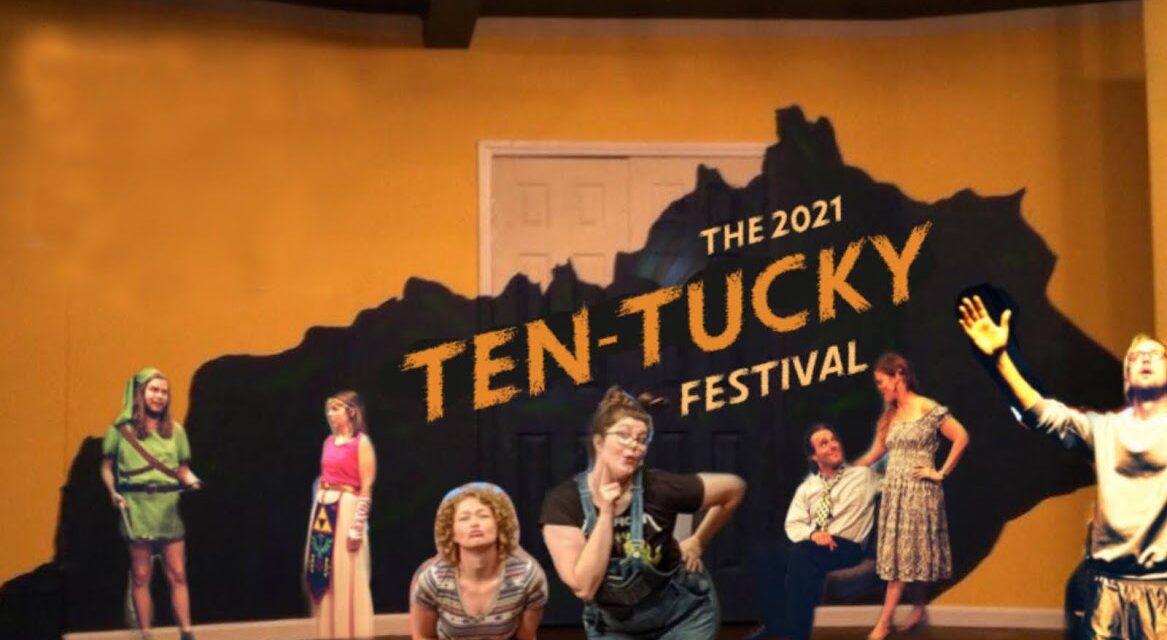 As far as theater seasons go, Louisville seems to once again be in the swing of things. With the reopening of a stalled yet safe theater schedule comes community favorites that keep the scene thriving in weirdness. I’m talking about The Bards Town’s annual Ten-Tucky Festival. In its impressive 10th installment, this short play festival displays the local flavor of writers from all around the Bluegrass state and shines a light on theater artists both on and off stage.

The Ten-Tucky Festival embraces a certain “hey gang, let’s put on a show” type of vibe. The stage is small and the actors participate in scene changes in full costume immediately after a play and they might even have served you dinner prior to the show. The show presents a fun and casual evening of short plays with producers, Rachel Allen and Sabrina Spalding as hosts. The banter and jokes were cute at best but at times fell flat as the company scurried around them to clear sets for the next piece. While the scripted banter between Allen and Spalding felt self-serving and random at times, especially after pieces with a serious tone, I was unsure what the overall purpose was. Having seen previous Ten-Tucky Festivals, I know a host-type character has been used to move things along. With a short play festival like this where a banner on stage and programs present all the necessary information, I think going without a host should be considered for future productions.

When it comes to the actual plays, the talent and effort were wide and varied. All entertaining in their own way, no two plays were the same. The festival had everything between comedy, drama, and some more difficult to define. Regardless, there was something for everyone. And the cast brought their best performances to these works.

The comedic pieces walked the line between sketch and play which worked equally well. Brian Walker’s Queer Trek (dir. Rachel Allen) pushes the envelope of norms as nerds come out of the closet to their parents in a polyamorous twist. The script contains the typical over-the-top flair and narrative twists and turns that are characteristic of Walker. Date Night, by up and comer, Zoe Peterson (dir. Corey Music) is full of giggle-inducing shenanigans at an Applebees. Peterson’s eccentric creative knack for dialogue and quirky concept makes me curious about what’s to come. April Rea’s Lost and Found (dir. Tony Smith) uses Cyndi Lauper as a moral and literal compass for a couple on the verge of a break-up. Perhaps the freshest point of view, this brief work uses the works of the “unusual girl” and dives deep into what would otherwise be cheesy hits from the 1980s. Colby Ballowe serves up some religious humor in Highway 61 Revisited (dir. Meghan Logue Holland). With a Monty Python-esque parody of the story of Abraham, this witty piece felt more like a well-written sketch comedy bit than a short play. Be that as it may, it was nevertheless entertaining.

The festival serves up some drama as well. 3 Hours till Dawn by Templeton Moss (dir. Ryan Watson) is an exploration of morality as a murderer faces death row in the Old West. The dialogue serves as a deconstruction of right, wrong, and what makes a person good. Due to the large theme at work, I would have liked to see this play as a one-act. Eric Thomas’ Nerve and Sinew (dir. Patricia Rudd) serves up a tender depiction of love and patience as a family faces the effects of dementia.

The Annual Tea Party by Mollie LaFavers (dir. Sabrina Spalding) opens the second act. An honest attempt to depict a surreal reunion of childhood friends over a tea party, the stakes for this work might have been too high for a ten-minute script. Peril and ethical dilemmas are on the line as friends confront each other for growing up and leaving each other behind. Martin French’s Sword Play (dir. Darren Mcgee), though brings useful silliness to the festival. This fun satire of working in an office indulges in the joys of wordplay and puns within the feud of office mates who have had enough. Perhaps it’s a coincidence but the bit with the stapler at the end recalled the now-iconic Office Space.

With a large cast playing multiple characters throughout the night of plays, this ensemble brought out a diverse range of performances. They proved they could handle the comedy, drama, and even Godly commands. After Covid forced 2020’s theater cancellations and closures, it felt good to see new and interesting theater again. 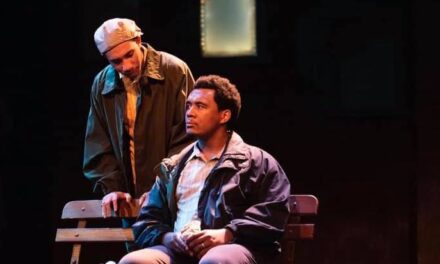 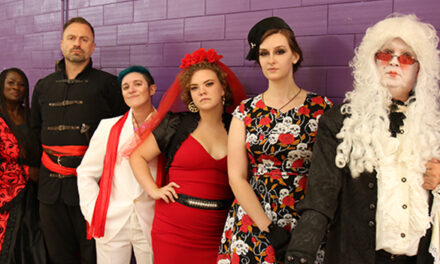