Fannie: The Music And Life Of Fannie Lou Hamer

Intimidation physical and otherwise, the threat of arrest and incarceration, and bullets fired into homes under the cover of darkness. These are the familiar tropes of white power responding to civil rights activism in the 1960s. So familiar that they have fallen into cliche. Until you listen to someone testify. Someone who was literally beaten down physically. Suddenly the experiences are personal in a way that forces identification, empathy, and compassion. It hits home.

At Actors Theatre, on the Pamela Brown stage, Fannie Lou Hamer offers highly personal testimony of the front line of the fight against injustice that raged across the American south in the 1950s & 1960s. Given a highly vivid, confident form by Robin McGee, the hard reality of stepping into that struggle is not abstract or academic, but a story told by a larger-than-life presence in visceral detail.

Moriah and Isabel Curley-Clay’s set is a church, with a vaulted structure that frames rich but judiciously employed projections, so the religious tone is in place before McGee enters, but she brings it home with real authority, stalking the stage, calling out to the audience and getting a genuine response. It is very unapologetically Southern Baptist in its aesthetic but the sense of ritual storytelling is universal and succeeds.

The evening is upbeat and inspiring despite the degree of suffering and loss that permeate the narrative. At one point Hamer describes a jailhouse beating in excruciating detail that makes particular note of the twisted male power structure of the incident in which white law enforcement figures force black male prisoners to beat her until exhausted. Why she survives the violence is difficult to comprehend except that is the fuel for her fire. You beat her down and she rises up twice as tall. Still, the scene is a difficult moment, one that reaffirms the reality of violence, cruelty, and repression behind the colorful anecdotes and indomitable perspective that is used through most of the evening.

And that is crucial to playwright  Cheryl L. West’s thesis that Hamer’s lessons speak to this moment and time. For West, Hamer lives in 2022 as surely as she lives in each moment of the fight for justice 60 years ago.

McGee sings often and fervently in the course of this extended monologue, and a tight onstage band is led by keyboardist Morgan E. Stevenson with Spencer Bean (guitar) and Chris King (drums). They are good but they never occupy the center or detract from McGee’s high energy performance.

Most critics might talk about the didactic nature of the material, or comment on the unabashedly Baptist religiosity of Hamer’s perspective, yet West’s premise is to imagine Fannie Lou Hamer speaking to us in straightforward language about her life, and the religion is true to what we know of the woman. And the times tell us that these lessons offer wisdom and important reminders that the sins of the past are still daily realities for many Americans.

Fannie: The Music And Life Of Fannie Lou Hamer 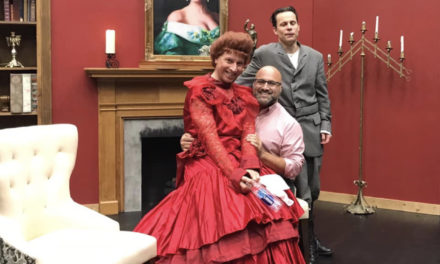